Annabelle (born May 13, 2015) is the Sister of Isabelle and she has three aunt's called Chelsea, Stacie and Skipper. She is a member of The Rapsters.

Annabelle is a young, light skinned girl with dark blonde hair. In the infobox photo, She wears a skirt or a dress.

Her nightwear is sometimes a purple night gown, but sometimes, she wears pink two piece pyjamas with candy hearts on them that say "Party." Her swimsuits can differ at times but her usual swimsuit is pink and has two dark pink straps and tiny light pink hearts on it.

Annabelle and Isabelle have a very strong sisterly relationship, though sometimes they can bicker and argue and fight with one another but by the end of the day, they both love and care for each other no matter what.

Annabelle loves her mother very much but sometimes she can get on her nerves especially when she misbehaves or doesn’t do as her mother says. However despite all that, Barbie does care deeply for her daughters and would want what’s best for them.

Annabelle and her brother have good relationship but sometimes they both argue and she leaves him out when she and her sister are playing games for girls. Like Annabelle, Tommy also likes to fool around and cause trouble, but in the end of the day, they both care about each other.

Annabelle and her father have a great relationship but like Barbie, he’s also strict with her, but sometimes he’s cool and let’s her have chicken nuggets and ice cream even if her mother says no. But in the end both him and Barbie want what’s best for their children.

First Word: Dada (but only Ken knew that), Mama 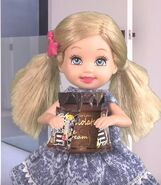