Barbie Grace's World Wiki
Register
Don't have an account?
Sign In
Advertisement
in: Characters, This wiki, Carsons and Roberts,
and 5 more

Thomas "Tommy" (or "Tom") Hatchet Carson II (born December 25, 2017) is one of the main characters of Grace's World. He is the younger brother of Annabelle and Isabelle.

At some point during or just after Season 3, Barbie and Ken had sex and conceived Tommy.

The Floor is Lava Challenge and Barbie's Baby Surprise[]

Tommy was kicking (not in labor) and caused Barbie to pass out and have a nightmare about three triplet boys who love Ben 10. However she was woken up by Ken and given tea and bread. Ken proceeded to call Tommy "Ken Junior", but Barbie clocked him in the face with her fist.

Thomas "Tommy" or "Tom" Hatchet Carson was born to his parents Ken and Barbie Carson at 12:00:01 a.m. on Christmas Day 2017. He has two older sisters (Annabelle and Isabelle) who are two years older than him.

Isabelle wakes up at 4:30 a.m. on a Friday. She tells the viewers she has 30 minutes to get to the preschool before she is late, as they have to go to the museum. She tries to get Annabelle, then Chelsea, Stacie, Barbie, Ken and Tommy awake. Nobody listens to her and Tommy goes back to sleep.

Later, as Isabelle and Annabelle try to make breakfast, they burned the toast, and the fire alarm goes off. Everyone wakes up and rushes downstairs, while Ken screams and dials 911. Tommy gets a bucket of water from the pool and splashes it into the kitchen, causing Barbie and Ken to become drenched. A firefighter turns up at the door, but Ken sends him off because he "took care of it".

Isabelle yells at everyone to get dressed and into the car. Barbie, Chelsea, Annabelle, Isabelle and Tommy fumble. Tommy spills his cereal on his t-shirt and Barbie rushes to get paper towels. Isabelle says they have no time, and pushes Tommy into the boiler room under the stairs, locking it and turning on the boiler. Chelsea asks where Tommy is and Isabelle says he's getting dressed.

At 5:20 am, Isabelle refuses to wait anymore, and drags Isabelle and Barbie to the car. Chelsea decides to walk to school, leaving Tommy alone in the boiler room with the heat increasing, screaming for help.

Still in the boiler room. Tommy claws at the locked metal door for someone to help but nobody comes. Tommy is now drenched in sweat and takes off his sneakers, which are drenched in sweat. He leans against the door and groans in pain from the heat. He pulls off his drenched sweater and tugs on it causing water to come out. Gasoline starts leaking from the boiler and steam hisses through the room as Tommy looks drenched. He sets his clothes in a pile. Getting up, he rushes to the boiler trying to turn it off. Steam hisses into Tommy's face and Tommy sweats more. Tommy runs back over to the door kicks off his sweatpants which are also drenched. Tommy is now drenched in sweat and looks like he just jumped in the pool. He pulls off his socks and tugs on them, with sweat coming out like tugging on a wet washcloth. He pounds on the door for someone to let him out. He pounds and screams as sweat gushes down from his head, armpits, crotch and feet. We can literally see his underwear become wet from the steam and heat. The room is now 130 °F (around 54 °C), and Tommy simply can't take it. Steam and gasoline spray out from the boiler as sparks begin to fly, too. Tommy screams for someone to let him out.

Cut to the other side. We can hear only faint whispers and tapping--despite the other side being yelling and banging. Steam hisses from under the door.

We cut back into the room. Tommy stands up, now wading in a puddle of his sweat. He watches sweat gush out of his underwear, going slosh-slosh inside of it. Tommy shakes his head to get sweat off his hair. He looks at his arms and legs. They're becoming red and are drenched. Tommy's exterior body temperature was now 130 °F (around 54 °C) and the room was 150 °F (around 66 °C). Tommy walks around looking for ways out. He sees the room is completely dry apart from his sweat and the gasoline. The boiler hisses and sparks, making rapid noises. Tommy backs against the door and hears singing as his back, legs, hands and butt touch the door. He looks at the back of his hands and sees burns. He screams in terror.

The boiler isn't stopping. It won't. He pounds and kicks at the door trying to get out. More sweat pours out of his underwear. He cries. Sweat gushes from his crotch, armpits and feet. He collapses against the door and sits, sweating. Zoom in on his face. Panting for breath. Sweat dripping down. Tommy's skin color becomes deeper red now as his veins start appearing. The outer layer of skin begins to melt. Tommy screams, rushing to the boiler. He gets a burn on his arm from it, but climbs to the top of it. He starts pounding on the roof. Soon, he finds the crawlspace between the boiler room and the outside. There are cobwebs and dirt in there, but he doesn't have any other chance. The room below is full of gasoline and sweat. Tommy gets into the crawl space. From there he starts kicking on the roof so that it collapses the Alleyway. Dirt comes down and rats and spiders scurry. Tommy sees steam coming from the boiler.

Cut to the outside--steam hisses from in between the boards.

Cut to inside--Tommy, still sweating, kicks a hole in the boards, but can't escape this way. His feet and hands are bloodied up from punching it. Any more and they'll break. He puts his face through the hole and screams for help, also letting it cool off. He then wiggles his legs, arms, and later his penis out of the hole to cool off. Knowing he can't escape, he jumps back into the boiler room. He slips off the boiler into a five inch deep puddle of gasoline and sweat. Tommy pulls off his underwear, which disintegrate when touching the water. Now naked and sodden from sweat, Tommy crashes into the door. He then sees the boiler, hissing as ever with steam GUSHING out of it. Black smoke starts pouring out along with sparks. He rushes over to it as the light flashes and sparks fly and the hissing gets to maximum capacity.

Silence. Fade back in---the boiler is off, the steam and sparks disappear as the smoke cycles out of the hole Tommy made in the roof. Tommy wades around in the ankle-deep puddle of gasoline and sweat, completely naked. Cold air rushes in and hot air rushes out. Tommy cools down. So does the room. First 130 °F (around 54 °C), then 120 °F (around 49 °C), then 110 °F (around 43 °C), and so on. It cools down further as Tommy smiles. Tommy now wants his clothes, and puts on his drenched underwear and socks, then his sweater. As he puts on his sweatpants Ken opens the door. A shining light comes down on the drenched Tommy who smiles as steam comes out of the room. Fade to black. End of episode.

Tommy is mischievous and is usually the first to find something. This is shown when in the episode, "No More Chocolate!," Tommy is the first to find the chocolate. He also feels left alone like when he couldn't join the girls' club and when most of his relatives have a friend but he doesn't. Eventually, Matt became his friend which made him happy because he now has a friend that has a lot in common with him. He holds a bit of a scheming personality. He might be a bit smart too as in Among Us In Real Life (the episode), we see he tricks everyone and he wins the game. He also loves solving mysteries. Tommy is constantly bullied and tormented by his older sisters Isabelle and Annabelle and his aunts Chelsea, Stacie and Skipper. Those 5 would often duct tape Tommy under their bed or other places and make him sniff their shoes, rub their feet/socks, suck their toes/socks, lick their soles/socks and kiss and worship their soles. They'd also rub their feet on him. This makes him feel left out and sad.

Tommy is a short and chubby little boy with peach skin and blue eyes. 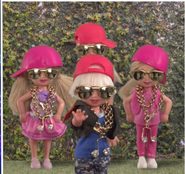